We are regularly swarmed with questions from our readers and none more so than this: Do air purifiers cool the air? A common question where many people are confused between an air purifier and a fan. In this post, we're going to address the mechanical differences between the 2 and why an air cleaner does not affect room temperature in anyways. Ultimately, we will debunk the "air purifier cooler" myth once one for all and end all confusion.

An air purifier does not cool a room unless it is a hybrid fan.

Do Air Purifiers Cool Down A Room?

Air purifiers do NOT cool a room as it does not have the cooling mechanisms to do so. Unlike an air conditioner, you will not find cooling units such as an evaporator coil or condenser coil to help lower the room temperature. The reason most people might feel otherwise is the breeze of cool air movement that blows towards the skin when close to the air purifier’s outlet. This air circulation process is known as a “wind-chill” where the strong airflow provides temporary chills to our body via the exposed skin. The cooling effects are more noticeable when the air cleaner is on higher a fan speed or when you’re sweating (evaporation).

A typical air purifier consists of multiple filters e.g. pre-filter, HEPA filter, carbon filter, electric motor fan to pull and push air. It is specifically designed to remove harmful airborne particles and circulate clean air. The only exception is air purifier and fan combination models like Dyson Pure Cool air multiplier fan that comes with a built-in fine mesh filter, oscillation, and hidden moving blades. Not only does it clean the air, the swift spinning blades create air pressure to attract the warm air upwards and push cool air downwards that will circulate to the entire room.

Measured in Cubic Feet per Minute (CFM), a room air purifier typically has about 100-400 CFM depending on its size. Compared with a ceiling fan, it is averaging around 4,000 CFM and can go above 10,000 CFM for a larger fan. As you can see, the volume of air generated from an air purifier is significantly slower than a ceiling fan, therefore it will not reduce the room temperature even running at max speed.

The below table is the general guideline on how much cfm ratings are needed to cool a room.

The direction of the airflow distribution also plays a part in the cooling of room temperature. For example, the ceiling fan comes with 2 modes that you can switch in between. In the summer, the ceiling fan should be spinning counterclockwise to create a downdraft of direct cool breeze. In the winter, the fan needs to be spinning clockwise to create a downdraft and circulate warm air in the room. Likewise, air purifiers come with either upward airflow direction that draws air in from sides and distributes clean air at the top or forward linear airflow direction that draws air from the back and distributes out at the front. For summer use, the forward airflow direction is much more favorable although you can scarcely tell the differences.

Can An Air Purifier Work As A Fan?

An air purifier will not work as a fan because the generated airflow is too low to actually cool down a room. It is incomparable even to a cheap table fan, stand fan or ceiling fan with a turning impeller. However, you can opt for a fan that comes with built-in filters e.g. Dyson, ULTTY.

Should I Run Ceiling fan with An Air Purifier?

Yes, you should run a ceiling fan with an air purifier simultaneously to prevent settled dust particles on the ground from recirculating back to the air and triggering an allergy. Both appliances can co-exist together as one lowers the room temperature and the other improve indoor air quality. At most, the extra airflow circulation will slightly increase the air purifier's time in cleaning the air that is ignorable. There is no need to run an air purifier for a couple of hours first prior to running a ceiling fan or vice versa. 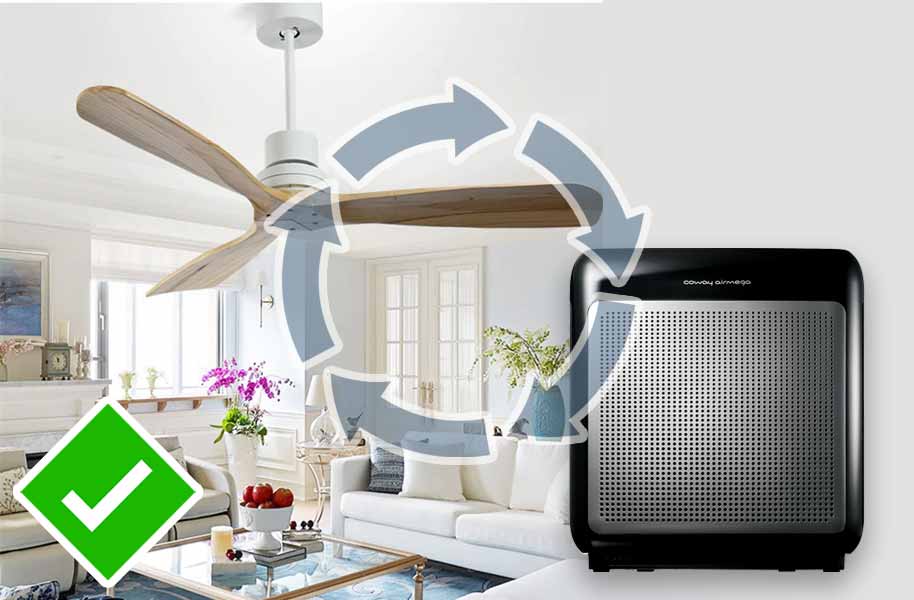 So How Can I Make A Room Colder?

By now you should have a clear mindset that an air purifier will not cool a room as its primary function is to clean the air. It is not a direct replacement for your ceiling fan or desk fan. Instead of relying on things that are not meant to be, let's focus on what can be done to lower a room temperature instead.

A loving father and a dedicated reviewer for airfuji.com with more than 1000 air purifiers under his belt. Max Fernandez is also one of the million patients currently suffering from asthma. Feel free to nudge him if you have any questions.
Home > Helpful Tips > Does An Air Purifier Cool A Room? (YES And NO)