A True HEPA filter is not the same as a HEPA-type filter. Even though both are mechanical filters, they vary in pricing, density, and filtration efficiency. In this post, we will define the key differences between the 2 HEPA filters and what to expect. Learn how to identify them in an air purifier and which one to go for.

What Is True HEPA filter?

True HEPA filter is a mechanical filter that captures 99.97% of airborne particles as small as 0.3 microns e.g. dust mites, pet dander, mold, pollen, bacteria, and viruses. 0.3 um size is known to be the Most Penetrating Particle Size (MPP or MPPS) to bypass a filter. A true HEPA filter is rated between 17-20 MERV. It can be found in an HVAC system, vacuum cleaner, air conditioner, or air purifier.

* Take note that the European standard HEPA filter has a lower filtration efficiency of 99.95%. 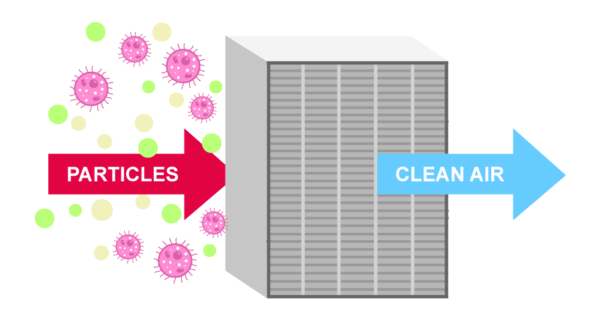 What Is HEPA-type filter?

What Are The Difference Between HEPA And True HEPA?

In short, go with a True HEPA filter if mold, pollen, bacteria, and viruses are your concern. These microbes can cause many respiratory problems and viral infections. If you want a cheaper filter but still retains the HEPA goodness, go with a HEPA-type filter.

How Do I Tell What Type of HEPA filter an Air Purifier Is Hosting?

The best way to tell what type of HEPA filter is used in an air purifier to screen through the specification from its manual or website. You can also check out the HEPA labeled score that should be printed on the box. Regardless of the filter naming convention, if is at a 99.97% filtration efficiency on particles as small as 0.3 microns, it is a True HEPA filter. Anything poorer than that would fall under HEPA-type filter.

How Many Types of HEPA Filters?

As stated by the Institute of Environmental Science and Technology (IEST), there are 6 types of HEPA filters from A, B, C, D, E & F. Each has its own characteristics and performance as shown by the table below.

A Little History About HEPA Filter

HEPA is an acronym for High-efficiency Particulate Air or High-efficiency Particulate Arrestance. A certified filter produced, tested, and labeled with recognized industry standards (DOE, IEST, UL). The first-ever HEPA filter was created in 1940 by American scientists for the Manhattan Project during World War II. The purpose is to prevent the spread of airborne radioactive contaminants from the atomic bomb. Over the next decade, it was commercialized and became a registered trademark filter.

What Is HEPA filter Made Of?

HEPA is a fibrous filter made from interlaced fine glass fibers with a diameter of less than 1 micron. The fine glass threads are tangled and compressed in myriad directions to form a filter mat. There are multiple folded sheets of fibrous material that increase the surface area and efficiency of the filter. A standard HEPA filter will have around 2,500 layers of glass threads.

How Does A HEPA Filter Work

When air is pulled towards the HEPA filter, the high-density filter fibers trap contaminants that pass through in either Direct Impaction, Diffusion, Sieving, and Interception. Direct Impaction happens when particles travel straight, collide, and stuck with a fiber. Diffusion happens when ultrafine particles move volatilely, collide with fiber, and stuck to it. Sieving happens when the particles are too large to pass through the gaps and get ensnared by surrounding fibers. Interception happens when Airflow is rerouting the particles around the fibers, but will eventually stick to the sides of fibers. With harmful particles trapped and removed from the air, only clean air will be released back out. Allergic symptoms like sinus, cough, wheezing, headache and breathing difficulty will gradually be alleviated.

Where Is A HEPA filter Used?

HEPA filters are often used in both residential and commercial applications that require airborne contamination control. With constant improvement over the years, HEPA filters can be found in a nursery home, hospital, health care, and medical facilities. It is regularly used in manufacturing plants such as FMCG, CPG, disk drives, and pharmaceuticals. HEPA filters can also be found in advanced industries e.g. aerospace, semiconductors, automobiles, and nuclear power.