You encounter the word dust, pollen, smoke CADR on your air purifier buying journey. You see it printed on an air purifier box. It appears on this website million of times. So what is the big deal of a few numbers? Why do manufacturers like to highlight it so much? What can I tell about an air cleaner just by looking at the numbers? Keep reading and I will give you all the scoop plus CADR dirty little secret.

The volume of filtered air.

What is CADR? Actually About?

Clean Air Delivery Rate (CADR) is a metric used to measure the numbers of clean air output from an air purifier. CADR ratings are calculated in cubic feet per minute (CFM) on the volume of air that is cleaned. The higher the numbers, the faster and more clean air the air purifier can produce.

CADR is developed by The Association of Home Appliance Manufacturers (AHAM). It is also recognized by the U.S. Environmental Protection Agency (EPA), U.S. Department of Energy, and American Lung Association. The purpose of CADR is to provide a uniform measurement for all manufacturers. Consumers can based on the numbers to evaluate and compare the air purifier’s performance. The ratings will be available on AHAM official website that is open to the public. 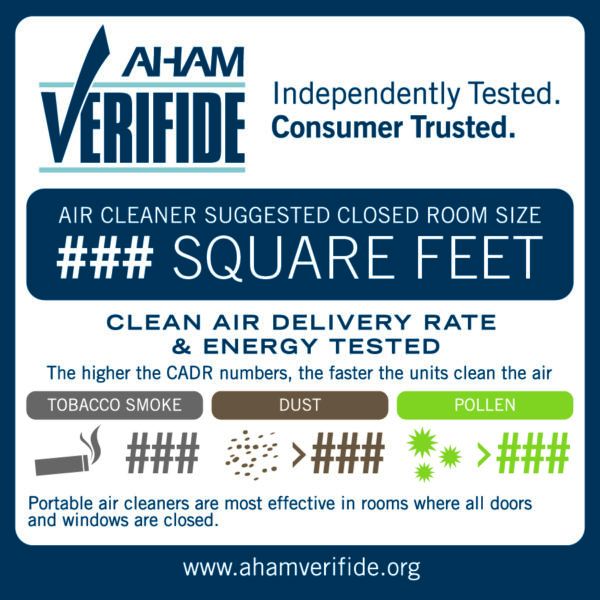 
How is CADR Measured?

CADR test will be conducted independently and periodically in 3 different categories: Dust, Pollen, and Smoke. The test will assess the air filter’s capacity to remove dust, pollen, smoke, and pollen particles between the range of 0.10 to 11 micron. To began, an air purifier will be placed in a testing chamber of 1008 cubic feet. Inside the chamber, the number of airborne contaminants will be measured. Next, the air purifier will run at max speed for 20 minutes straight while the number of contaminants is repeatedly re-evaluated. The leftover contaminants will then deduct the earlier recorded numbers and compared to the natural rate of decay. Finally, the tester will give the air purifier its official CADR rating.

CADR ratings are an accurate measurement but not without its controversy. It ignores many key factors that make an air purifier great, which defeats the purpose of its existence. Many consumers are misled by the numbers looking at the overall package and value. Below are some of the limitation in CADR:

To learn more about our review process, head over to our best CADR air purifiers you can get your hands on right now.

Here's some fun history lesson. AHAM exist since 1915 when 60 clothes washer companies formed the American Washing Machine Association. That's more than a century being a representative for different types of home appliances. In 1967, AHAM reached a breakthrough by being a single body to represent the interest of the home appliances industry in the United States and the world. Since then, the group has made innovation and efficiency its focus through public policy, regulation, and research. In the 1980, AHAM saw the need for a uniform measurement on air purifier performance regardless of the technology. Following that, ANSI/AHAM AC-1-2006 was created to evaluate the volume of clean air from a portable air cleaner. An official CADR will be given to the air cleaner after completing the evaluation.

What Is The Highest Possible CADR Ratings

How To Calculate Air Purifier Room Size with CADR?

Take the lowest CADR numbers, multiply by 1.55 and voila, you have the recommended room size in square feet. For example, a smoke CADR 100 cfm x 1.55 would cover 155 sq. ft. of room. Refer to the below CADR rating chart for more info.

What is a good CADR rating?

Anything from 200 cfm and above would be a good CADR rating for air purifier. 200 cfm would cover 310 sq. ft. of room size and mid-range model would be able to achieve that.

In short, YES, the higher the CADR, the better an air cleaner performance.

A loving father and a dedicated reviewer for airfuji.com with more than 1000 air purifiers under his belt. Max Fernandez is also one of the million patients currently suffering from asthma. Feel free to nudge him if you have any questions.
Home > Helpful Tips > What Is CADR Ratings?